The other day I was thinking about some old bluework blocks I have and have always thought I would make something from them. My goodness, I really should. They are so neat. The blocks were done by my sister's mother-in-law, Alice, many years ago, probably the late thirties or forties. We lived in this tiny little place north of Peoria called Rome, Illinois - seven taverns and one little grocery store. And you either were a river rat or lived on the wrong side of the tracks! Everyone knew everyone, which you know if you have ever lived in a small town. I spent lots of time with Alice's daughter, Dorothy Ann. We were just a year apart in age and spent so much time together playing dolls, playing house in their pantry and dressing their kitty in doll clothes. Also lots of coloring (life was so much different then!) Her grandmother taught us to crochet and I remember learning to make broomstick skirts from Alice probably when I was an 8th grader. My mom, bless her heart, did not sew but we had an old treadle machine and that is what I learned to sew on. I have been into this sewing thing since I was probably 7 or 8 years old. Whenever I got a few cents I would buy an embroidery kit (or paper dolls, another passion) at Ben Franklin's in Chillicothe. Later, when I was in high school, I worked at Ben's - but at the hardware counter. Will post a picture of that one day, too. However, I digress - back to blue work. 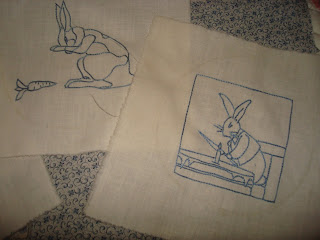 There are about eight little blocks with rabbits occupied in various ways. The stitching is beautiful and the backs are almost as nice as the fronts. 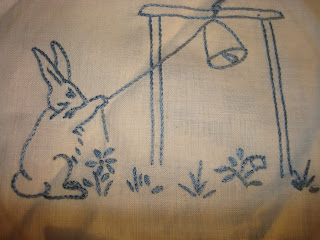 Altogether there are about 45 of these little blocks, so quite a few sweet wallhangings could be made. I feel they are too precious to use for baby quilts and should be preserved. 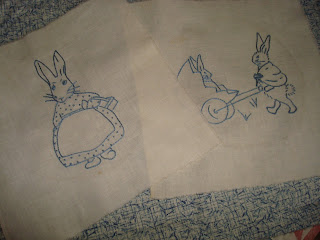 They are slightly soiled and you can see where the hoop was on each one. Any suggestions as to washing them - maybe soaking in a cold water wash such as Woolite? I will go on the internet and see what is safe. I certainly would not want to use bleach. 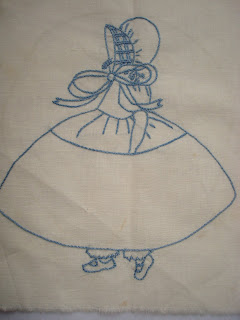 Just thought you might be interested in these little Pieces of the Past. I am going to keep them out and look for pretty blue fabric and try and make some wallhangings. I would definitely like to make one for each of my sister's sons. Besides the cute rabbits, there are several depicting Alice in Wonderland, animals, toys, birds, just darling blocks. Will post some of the other blacks later.
Posted by Funoldhag at 10:30 AM

Labels: Pieces of the Past

Heh Carol - I'll send you two links I found about cleaning linen - and I have a "ton" of the stuff they recommend - enough you can borrow and not even make a dent - so don't buy anything till we chat!

Your squares are absolutely wonderful and would make a nice wall hanging, or maybe a fabric book.. See you Tuesday! J

I was at Borders book store and spotted
Material Obsession. Glad you mentioned
it. Very cute book. Love the birds.

Those blocks are really awesome also I am excited to see your finished work!!