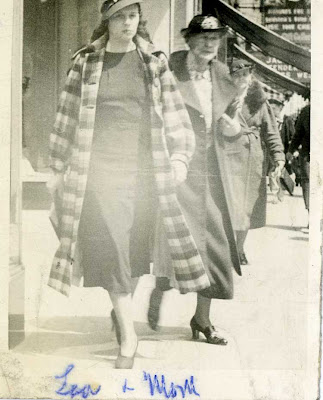 Here is a rather unusual picture and I am trying to figure out where Maggie and Leah were when this was taken. As always, someone has written on the front of the picture and, although Leah's name appears to have been misspelled, I think that something has eradicated part of the L and taken the "h" away. Back to the photo--I don't think this was taken in downtown Peoria since it doesn't make sense who would take it. More likely, this was in San Francisco when they visited Nelle although it doesn't seem likely that Nelle would run ahead and take a picture either. Regardless, the two Pearce ladies look lovely. Leah is wearing a beautiful plaid coat over a simple dress. Her hat is worn at an angle and has a ballcaplike brim. Maggie wears a skirt and pretty blouse under a very nice coat with a wide collar. Pinned on her shirt collar is the cameo she always wore. The outfit is topped off with a cute hat featuring a little cluster of flowers on the front and on her feet are some really cute shoes. Maggie wore shoes with little heels way into her later years. The lady walking behind them is very fashionably dressed, also. Wonder who she was? A photograph is a moment in time. (Click to enlarge)
Posted by Funoldhag at 8:14 AM

Labels: Fashion Show, Pieces of the Past

Let's see my grandmother was born in 1898 and she always wore a cameo also. Hers was a pinkish peach with a white figure. My mom has it to this day. My grandmother also loved her cameo. I would ride in the back seat with grandma and lay my head on her lap and she would let me play with the cameo pin while we went on long rides.