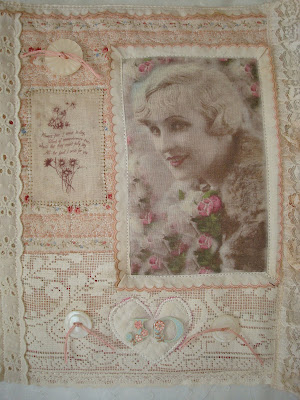 Tuesday evening's guild meeting was cancelled because of a lot of snow. Several things that were going to be done at the meeting had to be put on hold until next month and a task we were going to do for our annual quilt show will now be done at a Sit and Sew next week. A group of about fourteen signed up to do a secret Valentine exchange which we will do in March. When I was working on mine, the first one I did turned out just a little whopperjawed but too pretty to toss away so I finished it. I learned a couple of things from this one. Instead of cutting everything out, layering and quilting, I found out it is much easier to cut them all bigger and trim to fit afterwards. You would think I would know that anyway! The second one I did is similar to this but different! Will post that one after the meeting next time. I'm pretty sure I know what I am going to do with this one. (Click to enlarge)
Posted by Funoldhag at 11:01 AM

Okay - whopperjawed? How funny - you'll have to explain that one to me - it looks lovely regardless..... Jewels

How pretty, I love things that I always call Shabby Chic, you know the stuff made with vintage looking items and chennilles from bed spreads and what not. Things that bring back memories. Great job!!

Off to Detroit tomorrow, for Elle and Ann Arbor on Saturday for Gar's swimming. I will bring a project to work on. lol

Your sense of what goes together is perfect, this is a sweet valentine.

Whopperjawed.........I think that is my new favorite word!
I think the valentine was beautiful!