I did successfully get the little ruffled quilt all quilted and it now has the binding sewn on waiting to be finished. Planning to take it to Sit and Sew this coming Tuesday and doing it there. After I have finished binding it, I will take its picture and post it. It's pretty darned cute. 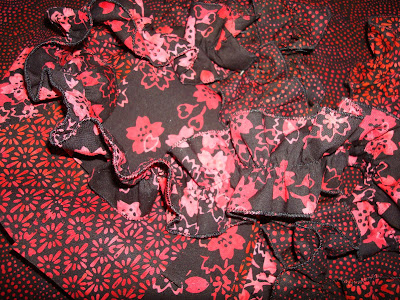 However, I have not satisfied my urge to make those ruffles and have now started another project which is not as big but will be lots of fun. It is all cut out and ready to be put together. This will be a batik ruffled tote or handbag. Using a tutorial as a guide, but figuring out how to add the ruffles on my own. Think it will be okay. 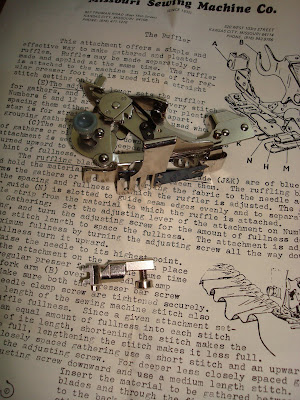 All of these frilly, fussy, little fun things got me to thinking about the big ruffler attachment I bought quite a long time ago and don't think I have ever used. I had one years ago and did use it for making square dance dresses but think I let it go with my old Kenmore when we lived in Topeka. I vaguely remember purchasing one in Kansas City. Where on earth would I have put it if I still have it? Can you believe the first place I looked it was there? I have a really old wicker sewing chest which I haven't opened for ages and there it was - still boxed up with the instructions taped around the box - what a surprise. Now I will find out if it is usable with the Bernina shank converter which I think is shown below the ruffler. Of course, I would never hook it up and use it without finding out if it could be adapted. It would open up all kinds of possibilities since it not only ruffles, but pleats. I kind of like being a pack rat sometimes! (Click to enlarge)
Posted by Funoldhag at 12:24 PM

Momma Made This said...

You found something in the first place you looked??? Wow, that never happens to me! : D

Your ruffles are wild and fun! Love it! Can't wait to see your finished ruffly stuff!

Oh I am excited about the batik Ruffle Bag. That is what I wanted to see you do, an old look with the new look fabrics. Should be just wonderful. Looking forward to seeing it.

Love your ruffles! So bright and happy. I'm looking forward to seeing both ruffled projects. Did you square dance? I did back in the day. My mom made me a dress. It was red flowers on a bright yellow background. It had ruffles on the neck and 2 different places around the skirt. Thanks for bringing back that memory. It made me smile. Doe-si-doe :)