My Newest Grandson and His Wife 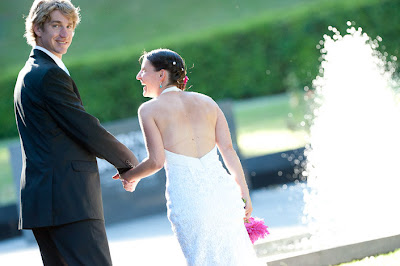 On Saturday, I acquired a second new grandson when Molly and Doug were married in Portland, Oregon, at a beautiful wedding held at the Cheatham Hall in the World Forestry Center. A good time was had by everyone attending the ceremony and the reception was under the huge tent outside where little white lights twinkled when darkness fell. There was a band that Doug's uncle and his cousin had and they were really good. Doug is from a large family and probably the lion's share of the guests were family. Quite a few little ones there plus his three young nephews were in the wedding party. Henry and Dawson were ring bearers and candle lighters and the older boy was an usher. Doug's sister officiated at the ceremony. You can see Christine, his sister, in the picture below when you enlarge it along with two of her boys that were in the party, her husband to the right, and Doug's brother to the left. 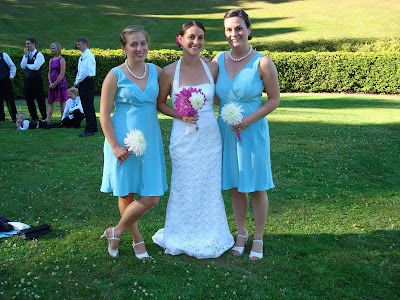 Here is the beautiful bride, Molly, with her maid and matron of honor, Hannah and Norah. Gosh, I adore these three girls! Molly just glowed. And her dress was just so beautiful - a heavy lace and I don't know what it is called. Maybe someone can tell me. The little one did the hair. Weather in Portland turned hot about Wednesday and the wedding was Saturday and still hot. However, they have very low humidity so that makes such a difference. All in all, what a fun time we all had. I have been draggy today but will bounce back to being a little less draggy, my usual condition.

Hannah on Friday found out that she would be receiving the invitation for the Peace Corps for sure. Today, the UPS brought her package and she will be going to Mozambique, Africa, the end of September. It is such a relief for her to know for sure - it's been quite a long time coming. It's bittersweet, but I am absolutely so happy for her. How I wish when I was a young woman we had had the choices the girls do now, but I am in no way unhappy about my life as I have lived it.

Have lots of blogs to catch up on and will be doing that a bit at a time. Hope all is well with all of you! (Click to enlarge)

Posted by Funoldhag at 5:59 PM

Carol what lovely photos (I especially like the one of your new grandson) Everyone looks so happy - sounds like you had a wonderful time - and how great for Hannah - we need to "catchup"...welcome back. Jewels

I too love the one of the bride and groom, a very creative picture. Her dress looks just wonderful on her and the bridesmaids are so very pretty along side their sister the bride. It looks like a picture perfect wedding celebration. I was just thinking when I was reading your newest blog, my grandmother was 90 years old at my wedding and she was able to attend and enjoy Leif's and my event. Sunday we were married 23 years. I am so very happy that you had such a great time!!

Welcome home, Carol. It looks like a lovely wedding. Each photo tells it's own story. I hope you will show more photos. I admire Hannah's courage. Even with choices, I'm not sure I would have been brave enough to go across the world. What a wonderful girl! You have lovely granddaughters. Some family resemblance there too. Rest up and take care.

Welcome back Carol, I was thinking of you today. Lovely wedding photos and how great for Hannah.

Welcome home! Looks like the wedding was a huge success! All of your pictures are wonderful, the bride is beautiful and the couple picture is amazing!!

Oh, they all are beautiful! How wonderful to be a part of this day. The fabric of her dress is gorgeous, I can only imagine the price of that lace! I'll be working on Lydia's dress soon, and the laces are amazingly expensive, but we'll be doing some frugal shopping.
I'm looking forward to more photos, too!