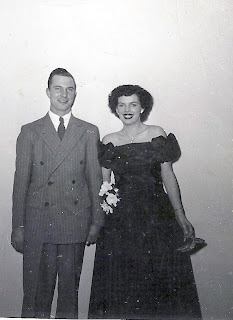 Here it is New Year's Eve of 2011 and what to do for Fashion Friday!  I was looking through files on my computer and saw this picture of Ray and me when we were very, very young and before we were married.  I cannot even remember the reason for being all dressed up but I do know it was not a New Year's Eve.  However, it could have been!   Ray is wearing a gray pin striped suit with a double breasted jacket.  I think it may be the same suit he wore in an earlier picture of us at a dance we went to in Galesburg, Illinois, at the branch of the University of Illinois where Desi Arnaz' orchestra played.  Carol wears an off the shoulder long gown that I believe was an iridescent dark red with a corsage of gardenias at her waist.  She carried a small purse.  This was taken probably in 1948 or 1949, many moons ago.  (Click to enlarge)
Posted by Funoldhag at 9:01 AM

Labels: Fashion Show, Pieces of the Past

What a beautiful couple! Such happy memories! I hope your new year is filled with great things- creativity, family, events- more memories to come for you, Carol!
:-}pokey

We should create our memories faster. Time is flying...
Happy New Year, Carol!
Be healthy!
:)

You both look very snappy, happy and ready to have a little fun! Beautiful corsage on your wrist----I am sure that set "Ray" back a few dollars. But--- I am sure he thought it was worth it. You look like a "movie star" and I bet he thought so too!

Many blessing to you and your family, Carol-- I so have enjoyed our blogging friendship this past year and look forward to 2011 with you and your blog.