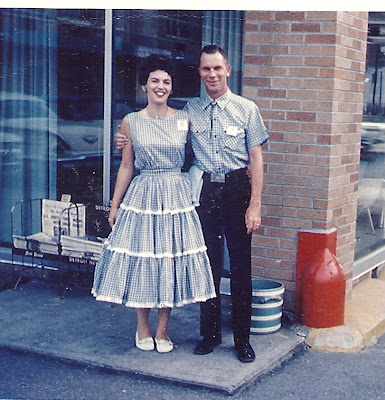 What the well dressed couple wore to the National Square Dance Convention in Cobo Hall in Detroit, Michigan, the year of 1961.  Just realized that was 50 years ago--time is flying by.  In a frock I fashioned myself (pulling yards and yards and yards of gathering thread on that three tiered skirt!),  I look like the majority of the "taws" in my tiered skirt trimmed in eyelet ruffled edging, and a sleeveless scooped neck blouse.  The fabric is blue and white checked gingham.  And, look, moccasins!  Wonder how many of those I have worn out over the years since I was 13 years old.  They have gone from $2.98 to over $30.00 in the 68 years I have had them as a mainstay in my wardrobe!  They are soooooo comfy - and they have to be the ones with no soles.  I am wearing a pair right now.  My "paw" is looking handsome in a shortsleeved western shirt that matches my dress.  I don't think I made that one, although I did make at least one shirt.  They were hard to do, and I wasn't enjoying that kind of sewing much when you could buy such great shirts already made.  A nice white or black western shirt went with everything.    He has a bolo tie and a fingertip towel in his belt.  We wear our name tags - our club was the Ft. Madison Star Promenaders and there were three couples that went to Detroit.  That was one of the only times Ray and I ever got away by ourselves when the kids were young.  Guess we didn't think much about it since our friends didn't get away, either.  It was a treat, though.   (Click to enlarge)
Posted by Funoldhag at 12:25 PM

Carol - the 2 of you look so happy. What great memories! Hope the Convention was a blast! J

You must treasure this picture, it is a great one. Look at your figure girl friend. Looking good.

Oh you looked gorgeous seems like yesterday I bet.

Look at that waist! You should have been on the cover of Modern Square Dancing magazine! I remember eating the pot pies and the TV Bill and I watched with Mrs. Martin every Friday night. And the outings in Rodeo Park in the summer. I have fond memories of dancing a few round dances with Dad myself!

Look at the little waist is right! Darling picture of the two of you!

I remember moccasins like those---I would buy a pair every spring and Baker's Shoe store. I had to save my babysitting money to buy them. That was when you were paid 25 cents an hour! Wouldn't the kids laugh at that now!!!!