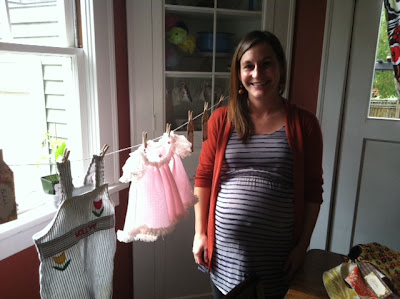 This picture was taken a couple of weeks ago at a shower held for Molly and her little Annie in Portland.  There is the little dress that went along in the package.  Her sister-in-law, Christine,  hung the little garments on a clothesline - isn't that cute?  Molly is due this coming week and on everyone's mind.  As you can see, she is mostly baby and hasn't gained much weight anywhere else but in her tummy.   Hoping the baby comes this weekend - but the little ones come when they are ready.

I did get the soup made Wednesday and it was yummy.  Called Sherry to stop by and get some more as I really went overboard and got out my big old pan that I have used for years.  I have one more soup meal left - seems to get better as the flavors blend.  In case you would be interested, I will tell you how I make it.  No recipe - but don't think you can go wrong.  I use beef stew meat, some sliced onion, celery (like to put some of the leaves in, too) and canned tomatoes.  For a big pot, I put in two regular size cans of diced tomatoes.  Shredded cabbage (I do lots) is really good in it and  I use the fresh.  This, of course, is all in water.  Bring it to a boil and then let it simmer for an hour or two or three.  Then slice up some nice fresh carrots, chunk up some potatoes and add those.  I like my veggies chunky.  At times I have put in diced turnips, also.  Mom used to add barley.  Also, I add noodles - either frozen or nice sturdy ones - and frozen peas.  Simmer until done.  You will season to taste, also.  Good the first day but even better the next couple of days.  Make as much or as little as you like.  My sis and I both made soup this way - just like our Mom.  And Nan was a good cook!  If you try it, I hope you like it!

Posted by Funoldhag at 7:15 PM

Wow, isn't she just the cutest momma to be! I'll bet you all can't wait to see that little baby.

Mommy to be looks beautiful, I know you wish you were there! I'm looking forward to see that dress once again worn by the family's newest generation.
Your soup sounds yummy, too! I love cooked cabbage, but I've never paired it to a tomato base. I'll have to try that ~
:-}pokey