Silhouettes Together and Some New Blocks 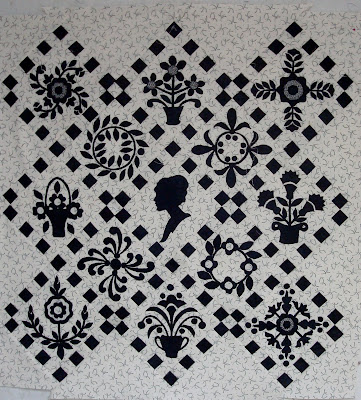 Here is Silhouettes all sewn together and ready to be trimmed and sandwiched.   I actually had quite a ripping time getting the sashing on!  I thought I knew what I was doing and started sewing the pieces to the sides of the blocks.  Nothing fit!  The corners did not come out right on all the rows.  I finally got the picture out - there was no pattern - and saw that you had to start with a white square on the top of one side of the block and a black on the other.  Eventually, I got it!  And I also found out that even with a quarter inch foot for my machine, I don't make really accurate quarter inch seams.  So had to sew behind some of the little seams and pick out the first ones.   Then I discovered I had cut the setting squares all too small.  The blocks are six inches and I used that figure.  Wrong.  You have to add the one inch sashing which makes them eight inches.  For the pieces for the four corners, I was able to use four of the side pieces, so just had to cut 2 large blocks and crosscut them twice.  However, I perservered!  And for that I get an Attagirl Carol Button!  At the end of this post, I will add the chart that shows you how to figure cutting those setting pieces.  It comes in so handy.  You can also make them bigger and trim the top after you have it all together.

The batik-Kaffe quilt is ready to have the border strips put on.  They are all sewn together and that will be next.   I also have the Dresden hanging ready to be pinned into the quilt sandwich.  And then I started playing with some old charm squares---- 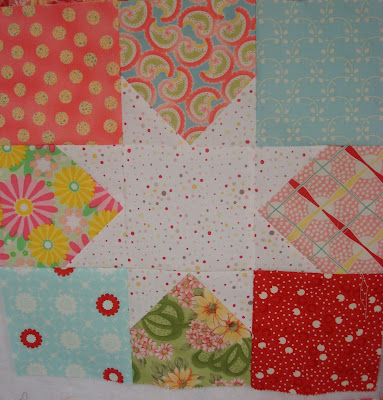 Hanging around Pinterest gets me in trouble.  I found a quilt using blocks like this and thought it was so simple and pretty. 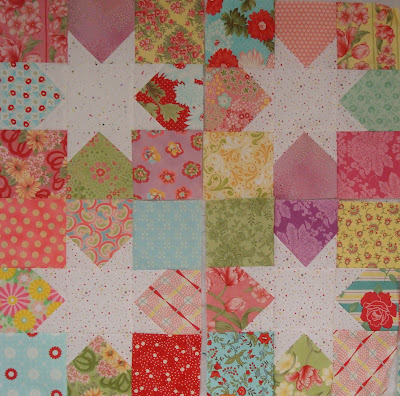 Here are four blocks which I put together.  In the quilt, they are separated with sashing, but I kind of like them butted together.  The blocks are big - about 13 inches so they would form a quilt quickly.  I have plenty of the white fabric with the multi-colored dots.  Last year sometime, I ordered some from Connecting Threads and it is quite nice fabric. 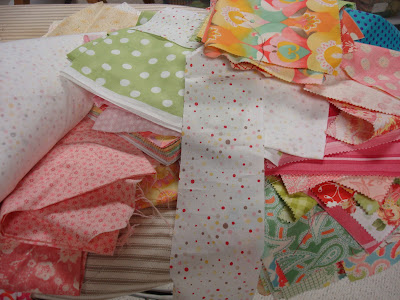 This morning I spent some time going through fabric in the basement and sorting things out.  I pulled pieces that I thought would go along with this quilt and piled them on the ironing board.  I will cut charm squares later.   Time to sort out some things for the guild bazaar at our quilt show next month.  Also will have to give some magazines.  This will be the first year I haven't made anything handmade to sell, but I think I will rest on my laurels.  Just am not efficient with my time anymore, but think that is normal for 84!   Here's the chart for the setting squares. 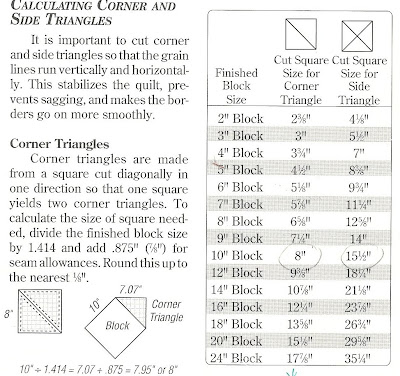 Posted by Funoldhag at 2:05 PM

Your silhouettes quilt is beautiful!

Your silhouette quilt looks wonderful. It is so pretty. I am glad that you reminded me to add the sashing when figuring the setting and side triangles. I am cutting some soon and probably would have done the same thing.

Anonymous is me Leslie oops