An Old Dog Can Learn a New Trick 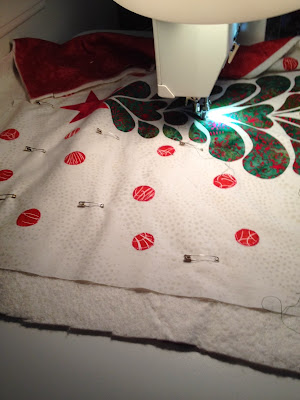 I have working on my tree - here it is on the machine being quilted. 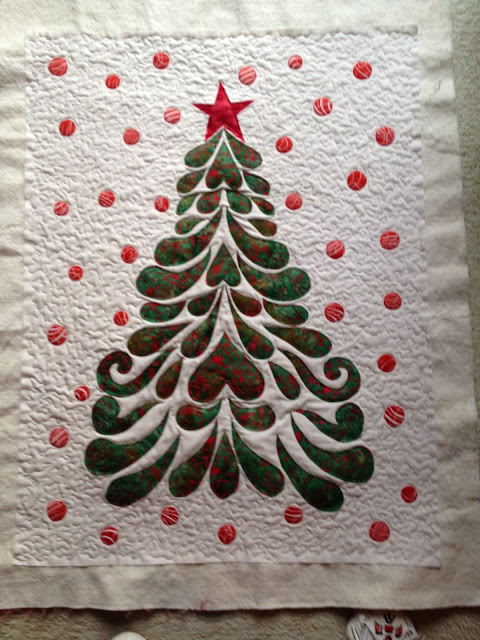 and here it is stippled and ready for binding.  I am really liking this little thing and will hang it above the little spool cabinet by my front door.  Just decided to go with stippling since all I really wanted was the texture.  I was going to sew lots of little red pearls on it but right now that is just more than I want to do and I do like the little red dots I sewed on the background. 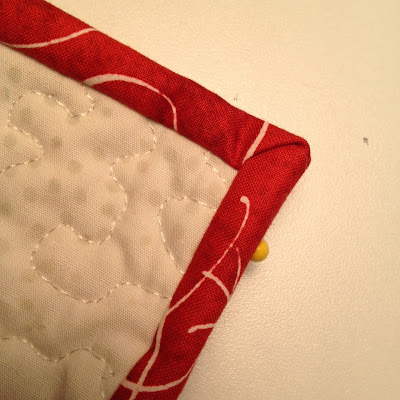 My new trick - or finally doing the mitered corners - this one is just pinned into place but I think they are going to work out well.  Had a bit of a hassle connecting the binding at the end, but it did work out well. 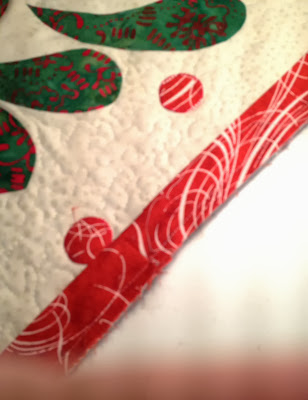 You can almost see the seam under the red dot.  It will look good when it is turned under.  I have since watched a video by Jennie of Missouri Sewing Machine Co (or whatever the name is for sure) and saw how she did the diagonal join which I was taught at one time and had completely forgotten.  As I was quilting my little piece, my machine sounded funny but the stippling looked great - until I looked at the back!  Egads - I had almost half of one side that the top thread had pulled way down and it looked awful.  Only redeeming feature that it was easy to get out.   I had run out of bobbin thread and changed bobbins and the thread wasn't coming out correctly which was easily remedied.  Hope I remember to check right away if something doesn't sound normal.

Earlier today, I was working on the round robin for guild and had it all finished.  Actually in four pieces, I took them to the basement to press.   I ended up with three pieces!  How can you lose a good sized triangle from the sewing room to the basement?  Looked back upstairs - no triangle.  Back downstairs, still no triangle.  It was not a hard one to replace, but I really didn't want to redo it.  I redid it.  Later on I came back to the basement and there the #X@* triangle was lying in front of the dryer.  I have no idea how it got there.   Actually the one I redid turned out better than the one I lost so it was not a complete lost cause and it took me probably no more than half an hour.   You win some and lose some, right?   On an unrelated note, I turned up 9000 followers on Pinterest this weekend.  I have been pinning probably close to 2 1\2 years and it's lots of fun. So much to see out there! 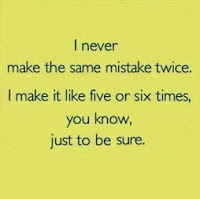 Posted by Funoldhag at 2:38 PM

Gosh you are a crazy old hag, I was laughing while reading and Leif asked what was funny so I had to read your post to him. We both laughed.

Your tree is gorgeous!! Thanks for the inspiration.

Ha ha Carol the quilting fairies must have been playing tricks on you... Lovely little tree - been there with the same kind of stippling disaster :)

I'm glad I'm not the only one who has trouble connecting the two binding ends. It seems like I take about five or six tries to get it right, and Marilyn always gets it on the first try! Your mitered corner looks excellent, though!
Annie

So fun to find your blog today! I enjoyed peaking around and seeing what you're up to! Happy Quilting!

Love you girl friend! You are so funny! Now you have 9056 Pinterest followers as I have just started following you!

Your tree is charming! I agree that it doesn't need any sparkling things.

Oh, Carol, isn't that the way it is, finding what you lost after climbing up and down, up and down, and then only after you give up and make a new one. You have me grinning. I am one of your followers on Pinterest, as you well know, but I only got into it this past month or so. I guess I'll always live up to my name, lol
p.s. I live by your last comment also. twice is never enough to learn....
:-}pokey